Are you one among the lucky people who have spent their childhood in the 90’s?

If your answer is Yes, then you have all the reason to consider yourself lucky.

We are part of a generation which has transformed tremendously over a period of 2 decades. The magnitude of this transformation has touched almost all aspects of our lives. One of the most crucial aspects that underwent mutation was “communication and networking”. During my childhood, there were days when we had to wait for weeks for a person’s letter to reach you from abroad. The times have changed and so did the means of communication.

Starting with the mobile phone revolution, people started getting addicted to the concept of Mobility and Social networking. Interestingly, these are two of many domains that AlignMinds Technologies has expertise on.

I am sure you would be remembering the legendary “Orkut” which sparked the Social networking concepts worldwide. Then came Facebook which overthrew all existing social networking platforms and service. 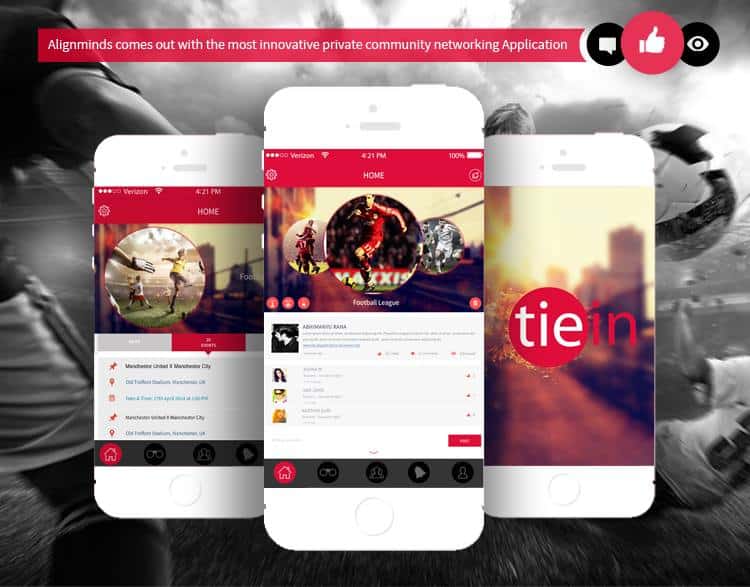 Have you ever imagined what is the core concept of Social networking?

Social networks can be broadly divided as Open and Closed networking platforms.

As an example, let’s consider Facebook since it’s the most successful social networking platform in the IT industry now. Facebook is an open networking platform where users from all demographics ( location, language, culture etc.) connect, communicate and contribute to each other. This openness has been one of the key reasons for the success of Facebook. On the other hand, we have closed networking platforms which is aimed at a restricted set of users who are particularly interested in a domain of activity.

Not a long time ago, we built a social networking application called “TieIn” which is a closed community network that caters to the Sports community. The application creates an excellent platform for sports fans, teams, coaches, players and enthusiasts to create private or public communities. The app provides the ability to these users to share information inside these private or public communities. Information is shared in the form of a normal text post, video or image. This privacy and closed nature are considered to be the success mantra of TieIn application.

In fact, there is no specific thumb rule which ascertains the success of a social network. But from the experience of dealing with clients in the social networking industry, here are a few tips that may come in handy during the conceptualization and development of social networking applications:

How to conceptualize and develop a social networking app?

Applications are built for a global audience and hence, nothing lesser than the best gets the chance to survive. So, it’s the responsibility of each team member to think out of the box and built apps that will make users fall in love.